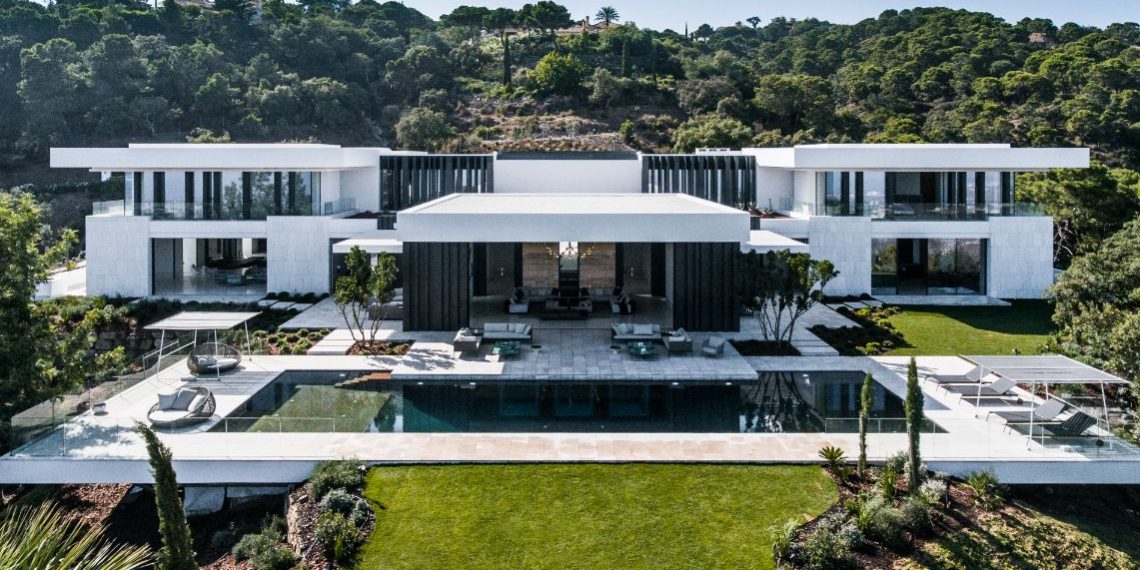 It is called mile in a metaphorical sense, as it originally referred only to the stretch from the Marbella Club to the Puente Romano Hotels. The term “Golden Mile” was coined in the early 1980’s by Roy Boston, the German singer turned successful property developer, and for whom a road has been named near his prize-winning development Alhambra del Mar, on the edge of Marbella City. Marbella’s Golden Mile starts at the western edge of Marbella City and extends for some 5 kilometres as far as the Río Verde, which is just before Puerto Banús and Nueva Andalucía, and stretches up to the La Concha Mountain, which gives Marbella its special microclimate. It was given its name due to the numerous beautiful estates and establishments within this area, including the Marbella Club Hotel, Puente Romano Beach Resort and the many beachside mansions adjacent to it, where the origins of quality tourism in Marbella began in 1954; and beautiful urbanizations such as: Sierra Blanca, Cascada de Camojan, Las Lomas del Marbella Club, the development of the Bismarck family known as the Marbella Hill Club, and Rocío de Nagüeles. Individual villas include many of the most magnificent mansions in Marbella, not the least of which are the Palaces of King Fahad and his brother Prince Salman bin Abdel Aziz, and those of many other personalities.

Tourism in Marbella began on the Golden Mile when Prince Alfonso von Hohenlohe opened the Marbella Club Hotel in 1954. As a result, long list of celebrities and royalty began to visit Marbella. And many of them fell in love with the resort and ended up buying or building homes in the area around Marbella Club. These glamorous properties gave their name to the Golden Mile. Nowdays the area continues to attract la crème de la crème from high society and some of the world’s rich and famous have expensive homes here.

Where is Marbella Golden Mile?

Marbella Golden Mile, is one of the most exclusive residential areas in Marbella. It stretches for slightly over a mile between Puerto Banus and the west edge of Marbella centre along the Mediterranean coast.

How far is the Golden Mile from Marbella Centre?

Marbella center is literally a five-minute drive from the Golden Mile. The same applies to Puerto Banus. In fact, both are so near you can walk there along the pleasant seafront promenade.

How easy is it to get to the Golden Mile?

Very easy! The Golden Mile has easy access to Marbella and Puerto Banus, nearby resorts and Malaga Airport. Both the A-7 highway and the AP-7 toll motorway are just a short drive away.

The Golden Mile is around 45 min. from Malaga Airport.

The best word to describe the Golden Mile in Marbella is luxury. Here you’ll find the Marbella Club and Puente Romano, some of the best hotels in the Costa del Sol, with some of the most expensive properties in Marbella with outstanding views, tropical gardens and exclusive shops and restaurants. In addition, the Golden Mile has a beautiful seafront promenade.

There are several good restaurants at Puente Romano Hotel (Michelin-star holder Dani García owns two restaurants on the Golden Mile – Leña and Bibo). Trocadero Playa, one of the best beach restaurants in Marbella, is also located in the area.

What are the beaches like on the Golden Mile?

Some of the best beaches in Marbella lie along the Golden Mile. They are mostly sand and can be surprisingly quiet even in high season. A succession of good beach bars and seafront luxury restaurants line this beautiful promenade.

Property for sale in Marbella Golden Mile and the property market, in general, in Marbella have always managed to hold its head above water, even during the financial crisis.

What are the main areas on the Golden Mile?

If you are looking for villas for sale in on the Marbella Golden Mile, all of them have a the common denominator of luxury:

The area closest to Puerto Banus is made up of several luxury developments including Oasis de Banus in Rio Verde playa, home to several new property projects; Urb Ancón where you’ll find Victor’s Beach, one of the most famous beach bars in Marbella; and El Oasis with several apartment complexes and a shopping centre. To the north of this section of the Golden Mile is the luxury newly built luxury development of Epic Marbella plus two world famous schools for higher international education – the American College of Marbella and Les Roches International School of Hotel Management.

Property on this part of the Golden Mile consists of apartment complexes such as Las Lomas de Marbella Club, built in a Mediterranean pueblo style and luxury villas on large plots. Also, we can find here a bunch of beautiful palaces, owned by arab real families. Much of the new development on the Golden Mile has recently taken place here. New builds include exclusive apartments at Las Lomas del Rey and La Trinidad, and ultra-modern Concept villas, el Vicario,…

Several exclusive property developments lie to the north of the Golden Mile. These include Nagueles, a development combining apartments, townhouses and villas. The Buchinger Clinic. The gated communities of Sierra Blanca and Cascada de Camojan slightly further north and in the foothills of La Concha, Marbella’s emblematic mountain peak, has several high-end apartment complexes along with large mansiones.

The sloping terrain means that most properties on the Golden Mile have amazing sea views to Gibraltar, Morocco and views to la concha the Sierra Blanca mountain range that backs the resort to the north.